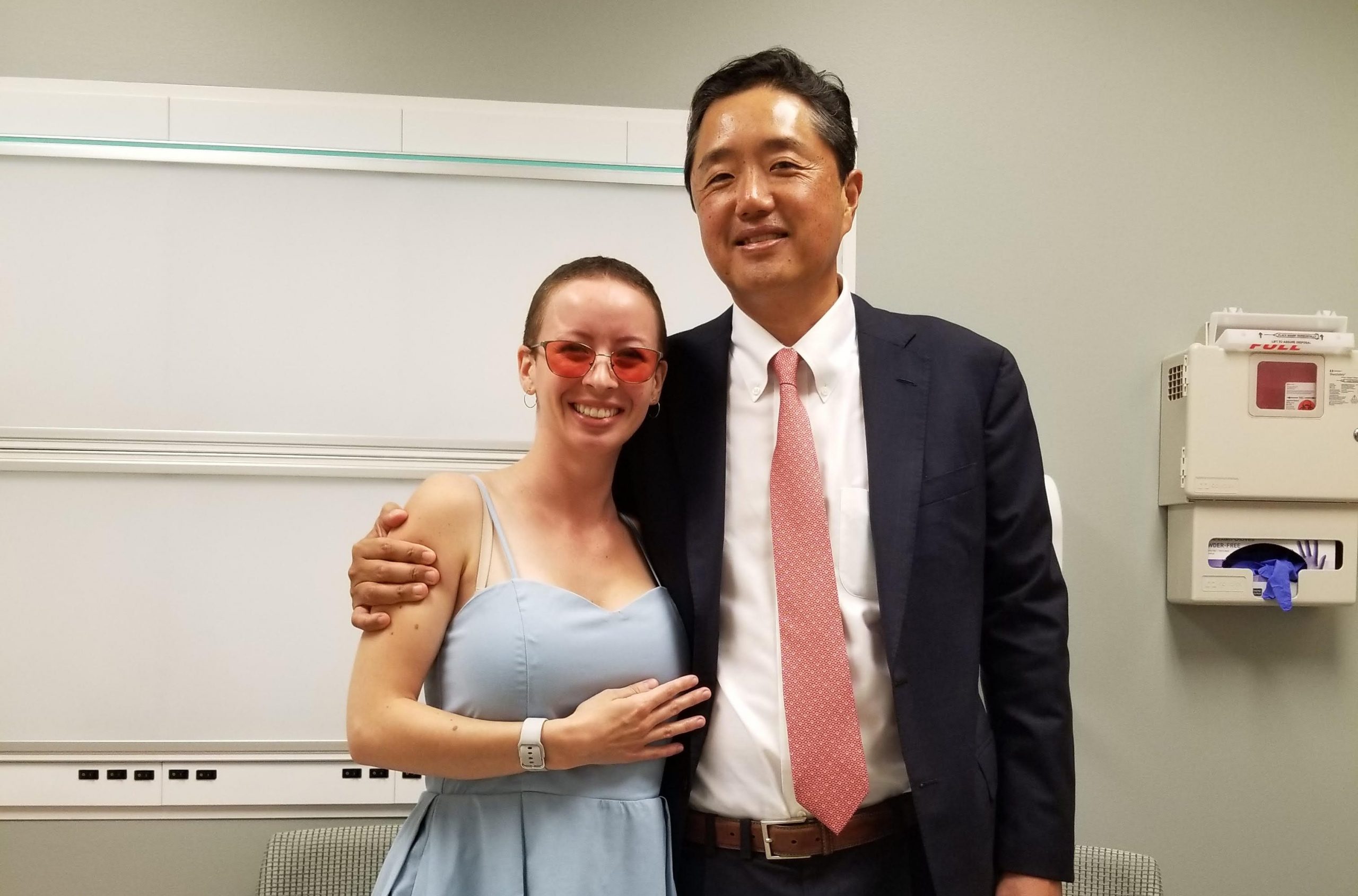 This is Fort McMurray

“Are you collecting money for that girl who needs brain surgery in the States?” A broad fellow asked as he made his way to the Service Department at Northstar Ford Lincoln.

“Yes. We are collecting for the Saving Lasha Campaign!” Heidi responded.

“Okay, here.” The man reached into his jacket pocket, pulled out a white envelope full of cash, placed it on the counter, and walked away.

“Wait! What’s your name?” Heidi ran after him.

“No, no! No name needed! Just make sure she gets the money so she gets that surgery!”

And with that announcement, he walked out the front doors.

This stranger must have dropped off almost $1,000 at the counter of Northstar Ford and he did so without needing anything in return. He didn’t know me. He didn’t know if I was a good or bad person before I became ill. But, none of that mattered to him.

To me, this was the ultimate act of love, agape love.

This act of kindness the stranger demonstrated wasn’t the first, nor the last, of amazing gestures of love and support from complete strangers across our beautiful city of Fort McMurray.

The News of a Rare Diagnosis

I moved up to Fort McMurray in 2015 and started work at Northstar Ford, which is where I met my wonderful husband, Christopher (where he still works as an Automotive Technician today). Life seemed wonderful, but my plans and aspirations came to a halt in 2016 when I was diagnosed with a rare brain mass known as a Pineal Gland Cyst/Tumor (hereafter referred to as, “PGCT”). 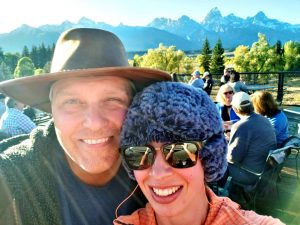 Lasha with her husband Christopher Barbosa.

Unfortunately, due to the lack of research, funding, and education surrounding PGCTs, many neurosurgeons believe that this small endocrine gland in the brain has relatively no purpose. I had many doctors compare the pineal gland to what the appendix was thought of many years ago. But now, we are learning that the appendix actually plays an important role in the human body.

This under-educated approach towards PGCTs (and their side effects) has made receiving medical attention, and help, next to impossible within the medical system.

I went through nearly three years of medical appointments, tests, and specialists to rule out every other imaginable medical disorder on this planet because none of my neurosurgeons, or neurologists, believed that such a small gland in my brain could cause damage to me physically or emotionally: “Your brain has lots of room to move. Your PGCT couldn’t possibly be the cause of any of your issues.”

My doctors never found anything to explain my symptoms (and considered my PGCT an “incidental finding” on my MRI because they were testing for MS, not brain tumours, at the time).

In the end, I was diagnosed with Fibromyalgia and Myalgic Encephalomyelitis.

If I had a dollar for every time a doctor looked through my medical records and called me: “Fascinating,” I swear, I could have paid for my own brain surgery down in the States – HAHA.

Due to the struggles, criticism, and disbelief I faced (while dealing with this mysterious disease), I decided to start up a website (www.pgctawareness.com) dedicated to raising awareness towards PGCTs and their mental health side effects, by telling my story.

Those who suffer from PGCTs also suffer from overwhelming mental health side effects. There is nothing more detrimental to a person’s mental health than admitting that there is something wrong, then actively seeking out help (despite one’s pride), and then being spit on and spoken down to by those they went to for help.

Unfortunately, many of my doctors in Canada did not believe that my PGCT was a problem, and the ones that did had encouraged my husband and I to seek medical treatment outside of Canada, due to the high controversy surrounding PGCTs here.

Deciding to Accept a New Fate

At 28 years old, I was bedridden and wheelchair-bound. I had lost my ability to walk, talk, or function without help. My Rare Disease Specialist told my husband that, “This is normal for ME patients” and I was told to accept my new fate. But, the pain was too much to bear.

We decided to put our house up for sale but it sat stagnant on the market; as the days faded away so did my cognitive functioning. I couldn’t live in that kind of pain and suffering – this wasn’t life. I had no quality left. I gave up (I did – I will admit that).

It’s hard to write those words out for all to read. But, after a decade long battle with chronic pressure headaches and life-altering debilitating pain, how much could one be expected to live through?

I started to research peaceful places to die. I had never felt so much love and peace within my soul.

The surgery I needed was $135,000 and being “put to sleep” seemed to be a more realistic approach (at the time) than selling our house to cover the mounting medical expenses; and then, coming up with the funds to pay for brain surgery.

Yes, I gave up… but my husband, my old employers – Northstar Ford Lincoln – and the city of Fort McMurray did not give up on me! Northstar Ford witnessed Chris and I’s struggles and the next thing we knew, Dennine and Marty Giles had opened their hearts and the doors to their company to give credibility to my cause. This beautifully unnecessary gesture allowed the community a location to lend their support to me and Northstar Ford quickly became my voice when I lost my ability to speak.

I knew in my heart that a bottle drive wouldn’t raise $135,000 but I wasn’t going to complain. I couldn’t believe this sweet gesture from Northstar Ford, they didn’t have to do anything, they had no obligation to help me. Who was I to a large company like that – as far as I was concerned, I was just another number.

Suddenly, my awareness website was being posted on social media outlets, a picture of my face and my story were being sent out, and local news stations took interest in my story. All this started with a bottle drive but it grew into something much more special.

Restaurants like, Mr. Mike’s and Cora’s started to donate their bottles to the Saving Lasha Campaign and the back parking lot of Northstar Ford quickly took on a similar look to that of a bottle depot (I am sure that the bottle depot happening in the parking lot clashed with the modern look of Marty and Dennine’s beautiful dealership, but they didn’t care).

Dennine and Marty continued to encourage people and allow truckloads (I’m not kidding, I mean truckloads) of bottles to be dropped off on their business premises to raise money for my brain surgery. 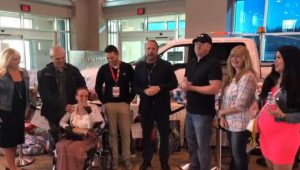 Other companies around town heard of Northstar’s bottle depot and started doing their own fundraisers. Some of the amazing gestures were: The Jaguar Lounge and Voigt Harley-Davidson who both held events nights; and, The Thickwood Barbershop who teamed up with Acden and The Meat Shoppe to put on a BBQ. With all this love and support from them, and so many others doing their own fundraisers, my brain surgery wasn’t just a dream too far away to touch but it was slowly becoming a reality.

I remember, when I was told that we had reached $40,000 towards our $135,000 goal for my brain surgery. It was at that moment that death tapped me on the shoulder and whispered in my ear, “Not yet, Lasha.” A feeling of faith and optimism flooded over me. I felt hope that I might have a second chance at a better quality of life.

Dennine and Marty started up a trust fund in my name and graciously accounted for the monies towards my brain surgery. This took a lot of stress off Christopher – as he had his hands full as my primary caregiver. Then, Dennine and Marty started up a Silent Auction for the “Saving Lasha Campaign”, they told us this would bring in the remaining funds needed for my brain surgery – and Oh boy, did it!

But, these magnificent people didn’t stop there! Northstar turned around and donated a site-ready F150 to their own Silent Auction; along with, countless other businesses and individuals across our city who donated items towards my cause.

On the Road to Recovery

I am now four months post-op, back in Fort McMurray, and eternally grateful to everyone and every business in this community for blessing me with the ability to walk, talk, and see out of both my eyes again. It is because of you! 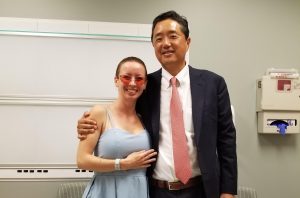 Lasha with her neurosurgeon Dr. Dong Kim, two weeks after the operation in Houston, Texas.

I am positive I have missed some companies or some special people above (brain surgery is tough to recover from and my mental processing is still a little delayed) and for that, I apologize. But know this, I don’t believe there wasn’t one business in town that didn’t donate towards the Saving Lasha Campaign. 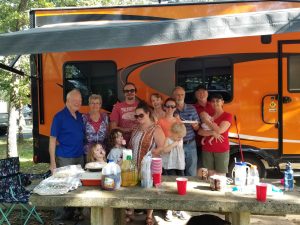 Lasha with her family in Arkansas in front of their RV. She said she “healed in nature after brain surgery to help with overstimulation”.

In all our travels, to and from Fort McMurray to Texas (for brain surgery), we met many people and all of them had the same thing to say after they heard my story, “We don’t know of any place, even where we are from, that would do so much to help someone as much as they helped you” – this is what makes Fort McMurray!

I am here because of all the amazing hearts and souls which make up this small – yet, incredible, city of Fort McMurray, Alberta. Thank you all for helping save my life – Christopher and I love you all!

Join us in helping raise awareness towards PGCTs and their Mental Health side effects by joining my website: www.pgctawareness.com/blog

Read through my blogs and share them with your friends and family.

Together, we can help educate medical communities and further research towards PGCTs and their health side effects (both physically and mentally). 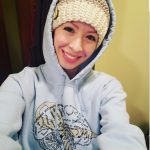 My name is Lasha Barbosa, I suffered from a rare brain mass known as a “Pineal Gland Cyst/Tumor (hereafter referred to as, “PGCT”)” and have been advocating for recognition of this disease for 2 years.

I have lived in Fort McMurray since 2015 and was diagnosed with a PGCT in 2016. Thanks to all the love and support from my previous employer’s, Northstar Ford Lincoln, and the city of Fort McMurray, I had brain surgery to remove my PGCT this past summer (2019).

My passion is my awareness campaign which my amazing husband, Christopher, helps me out with - so much! When I am not campaigning and raising awareness, you will find my woodworking, crocheting, taking pictures, and playing with my fur babies.

Tips for Packing a Healthy Lunch