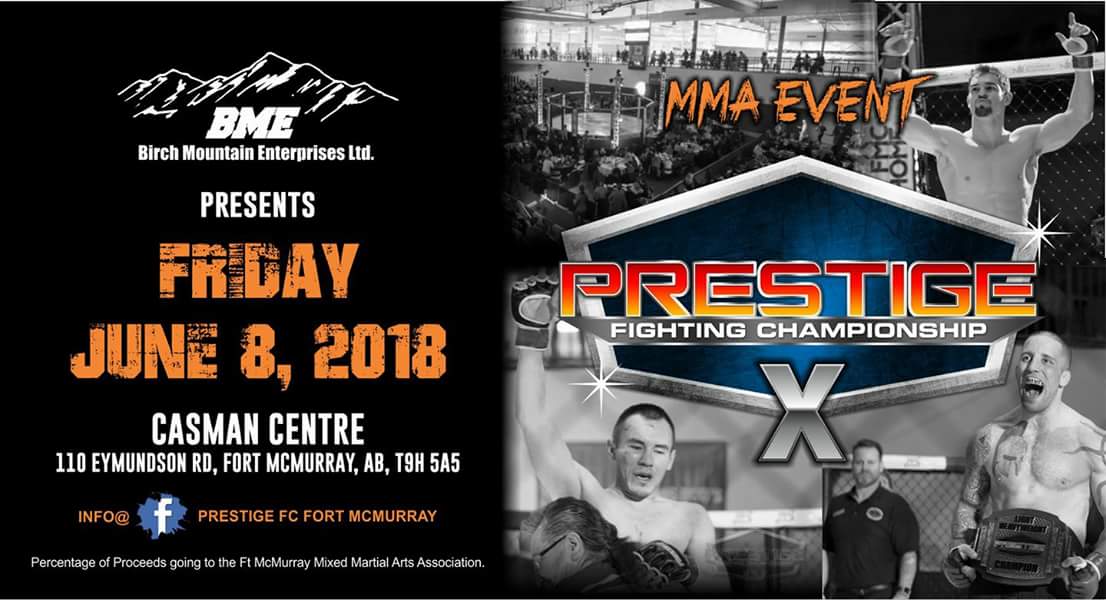 With Father’s Day on June 21, this is the opportunity to celebrate dad with a free pair of tickets for the big event! Click here for our Prestige FC 10 ticket giveaway contest.

Prestige Fighting Championship (FC) of Fort McMurray is celebrating its tenth event with a full fight card and its first-ever amateur welterweight title match at the Casman Centre on June 8. 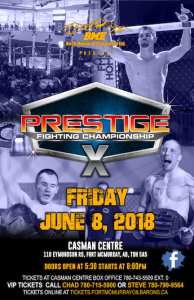 Prestige FC Fort McMurray was first launched by local residents Sandy Bowman and Chad Rice. Bowman, a business owner of two local gyms and master of mixed martial arts, and Rice, a community sports promoter and real estate investor, made history by bringing the first-ever mixed martial arts event to the city in 2010.

To highlight the upcoming tenth event, Dubeck and Rice decided to bring in two, giant heavyweights to compete.

“We wanted something big to bring to the fans,” Dubeck said. “After a lot of process of elimination, we settled on Tony “Kryptonite” Lopez vs. Jared “J-Rod” Kilkenny. They are two, huge heavyweights with a combined weight of 530 pounds and a combined fight record of 73 wins and 38 losses.”

Dubeck describes past events as victorious and electrifying, as he says the “electricity in that building is like no other sport you will ever see. It can sometimes feel like the roof is actually going to blow off of the event venue as the energy inside explodes when the fans cheer the victor.”

Fans are highly anticipating the fight card for the June 8 event, which includes: 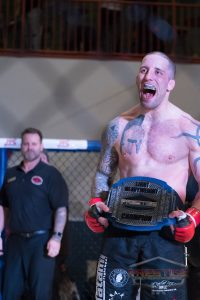 “It’s important to have events that unify both athletes and fans combined. For the athletes, it’s a chance to come out and showcase to the fans what they have spent so many long countless hours working on. It gives them goals to work towards and a timeline for maximizing their art in that period and coming out to perform at their best on that given night,” adds Dubeck.

“For the fans, it’s a chance for a night out of excitement with friends and family. We have always been and always will be an all-ages event. It adds to that great energy, much like going out to a local hockey game or whatever sport you choose. You get to come out and check all of your worries at the door for the evening, cut loose and cheer on your local fighters.”

The Prestige FC 10 takes place at the Casman Centre located at 110 Eymundson Road in Fort McMurray starting at 8 p.m. Limited tickets are still available and can be purchased online on the Fort McMurray Oil Barons website. For videos and frequent updates, visit Prestige FC Fort McMurray on Facebook or call the Box Office at 780-743-5509 Ext. 0.

Click here to take part in YMM Parent’s Father’s Day contest on Facebook for a chance to win a pair of tickets.

Enjoy Fight Night with the ‘Champ in Your Life’, family & friends!