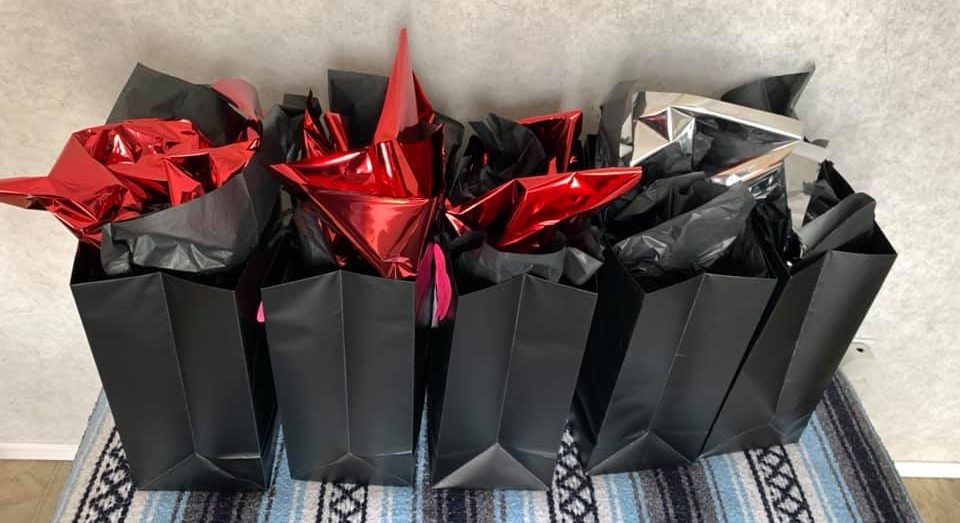 Alberta Wine Ninjas are coming to Fort McMurray on May 30

There’s a knock on the door, and you’re puzzled. No one comes to the house to knock these days unless it’s a food order or mail delivery. But you didn’t order food and the mail delivery is not expected until next week.

You excitedly remembered: I called on the ninjas to come to my home and told them all of my favourite things. You open the door, and there they are – a ninja. It’s someone you may know, or not. You can’t tell because they are in disguise.

And now, they’re running away and laughing because you caught a glimpse of them. You want to chase them, but you can’t remember if it’s in the guidelines and guidelines are really important to follow in 2020.

You then look down on your doorstep. And, there it is, a special package full of treats and happiness. It makes your heart explode. Quickly, you pick up your phone and head to Facebook to tell the group: “I’ve been NINJA’d.”

The headlines have been disbelieving lately (mind-blowing some would describe, if not barely believable). But it got better because after the public learned about murder hornets and blue dragons, ninjas were released across the province and into the Fort McMurray community. (Yes, you read that right, ninjas.) 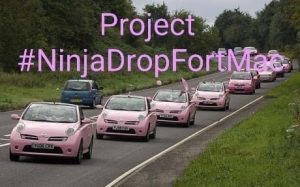 Rewind to two weeks ago, Fort McMurray was enduring its second State of Emergency of 2020 with its historic flood to the downtown core, and evacuation protocols were still in order.

Meanwhile, south of the province in Mountain View County, Shannan Stubbert co-launched a province-wide giving initiative on social media for residents to brighten the days of their fellow neighbours with the Alberta Wine Ninjas Facebook group.

Four days later, Fort Mac Ninjas was born by local residents on May 6. Since both of their inceptions, Albertans have been using new terms like NINJA’d and NINJA’ing.

“When we started this group, myself and my best friend Aimee Fieber, we noticed some people just needed a little extra love due to their situations,” Stubbert shared with YMM Parent. “When certain stories cross our paths that are really touching, we have been asking others in the area to show them a little extra support by doing a ‘super ninja drop’. We started to think about how Fort Mac could really use a Super NINJA-ING!”

And now, Stubbert and fellow Albertans are planning to come to Fort McMurray to take part in what she defines as a “super ninja drop” to the residents of the community. She announced the Project #NinjaDropFortMac yesterday (May 12) at 2 p.m. and has since seen hundreds reach out to make baskets in support.

“We had the resources to call on a large group of wonderful women, and we know how much joy this brings from all the chats, photos and videos. Why not take it on the road to people who need it most,” Stubbert said on initiating the project. “The response has been of resounding support. The ladies in our group are so excited to take part in this project.” 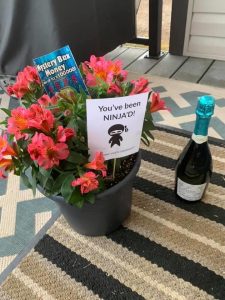 Albertans are leaving gifts on their neighbours’ doorsteps in a new giving initiative. Supplied photo

In respect to the COVID-19 pandemic, Stubbert shared the group will be practicing the Alberta Government’s requirements, safety measures and protocols for their travel to the Wood Buffalo region. The group will be meeting at the Edmonton EXPO Centre’s parking lot at 11 a.m. to ride into Fort McMurray on May 30.

“We are asking everyone who is coming with us to don their best ninja outfits, equipped with masks for this event. We would also like everyone who doesn’t share a household to travel separately and maintain social distancing. Also, from what I can see, most will be travelling back the same day.”

When they arrive, they will be going throughout the city where they are able. For those not interested in receiving packages or non-alcoholic beverages, Stubbert is asking those residents to leave a sign stating it.

“We will be spreading out through the city where we can do mass ninja drops all over,” she said. “Think of it as a giant game of Nicky Nicky Nine Door that involves gifts.”

To join the Alberta Wine Ninjas or Fort Mac Ninjas social media groups, head to Facebook. Both groups have strict guidelines and are private to protect the safety of group members.

YMM Parent advises reading all of the guidelines on each of the group pages before sharing personal information. To learn more about Facebook’s privacy settings for group pages, visit https://www.facebook.com/help/privacy/groups.