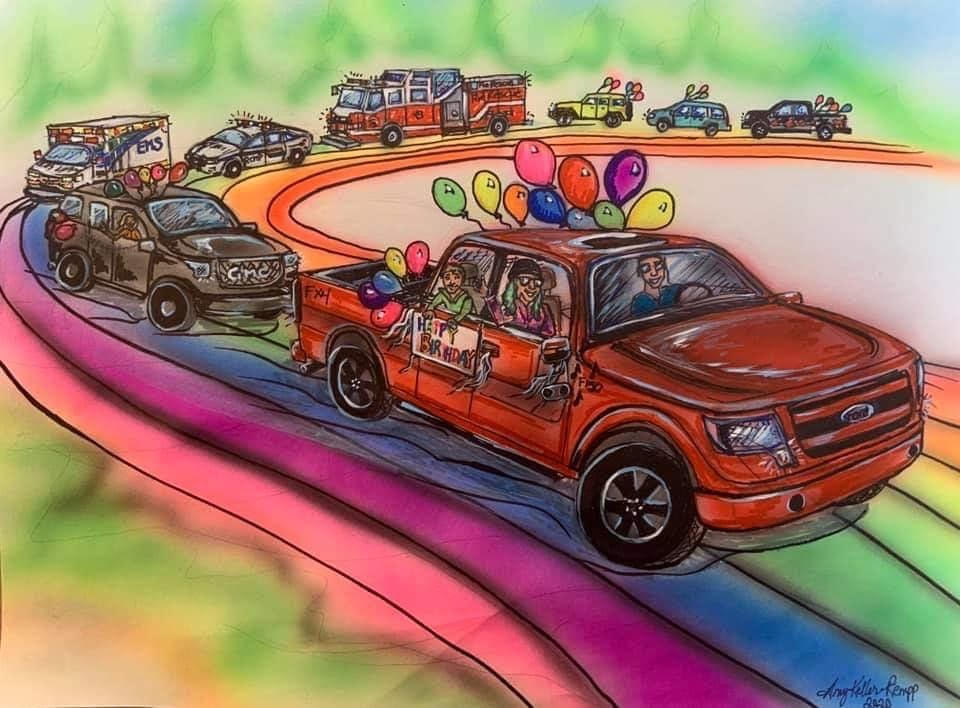 The Fort McMurray Birthday Parties on Wheels initiative surpassed over 600 events with the help of residents celebrating their birthdays on the city’s wildfire anniversary.

“It was such a beautiful thing that we hit over 600 on May 3. Never in a million years did I expect it,” said Amander Chubbs, founder and organizer of the Fort McMurray Birthday Parties on Wheels. 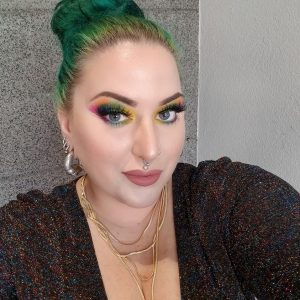 As the community comes together to help one another during the flood disaster, Chubbs and her ride-along party partners continue to bring happiness to residents, displaced or not, throughout Fort McMurray. And, when she hasn’t been organizing the event parties, Chubbs and her husband have been helping out with the flood relief efforts sandbagging at Heritage Park and collecting donations for evacuees.

“Today was an emotional day, and I didn’t personally post about the fire because enough is going on in the world. I didn’t want to add insult to injury,” she told YMM Parent in a phone interview on May 3. “I wanted to celebrate today as the water had gone down, the sun was shining, and happy birthdays were to be had. It was after six this evening when I realized I had completely forgotten that it was four years ago that the Beast happened.”

With a total of 18 special guests signed up to celebrate, Chubbs said yesterday had the biggest turnout for the birthday parties since it started. It included fire trucks, an RCMP officer, as well as her fellow members from the Fort McMurray Driver’s Club who showed up with their motorcycles and races cars.

A mother of twin boys shared how excited her four-year-old boys Garrett and Waylon Ure were to see everyone and also see their school friends.

“Thank you so, so much for everything you are doing,” Mavis Ure wrote to Chubbs in a Facebook post on the group page. “My twins seemed a bit surprised at the time but after they were so excited to have seen some of their school friends. At our evening gratitude, they both said the thing they were most grateful for was “all the people who went: Beep! Beep! And said happy birthday to me”.” 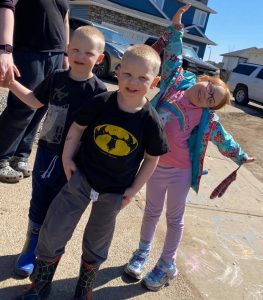 Twins Garrett and Waylon Ure celebrated their fourth birthday on May 3. Supplied photo

Rewind to 2016, their mother, Mavis was giving birth to them at the Northern Lights Regional Health Centre.

“They were born the morning of the evacuation here in town. They were evacuated on a city bus at five hours old,” she told YMM Parent. “I was just really happy that they had the opportunity to see some of friends and family and feel celebrated on their birthday. It hit home when they both said it was their favourite part of the day. I’m so grateful we have such a generous community who look after each other like this.”

The Fort McMurray Birthday Parties on Wheels is a mobilized train of vehicles full of family, friends and residents who pass by someone’s home who is celebrating their birthday and when they drive by the home they honk, wave balloons and even show off fun costumes.

“We have over three thousand group members now and some of the best messages I get are from grandparents from all over the world. I had one grandparent in New Zealand share that they were so happy to see their grandchildren’s birthday.”

The initiative was launched and founded by Chubbs on March 27 to help residents celebrate their birthdays during the COVID-19 crisis after she saw posts about clever ways others were still celebrating birthdays while practicing social distancing across the globe. 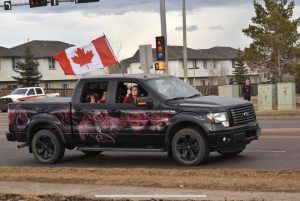 The local initiative has also held events to honour the frontliners in the community by gathering at grocery stores and seniors’ homes. On April 24, a convoy of vehicles joined together to drive pass the local RCMP office on Red Friday in honour of the tragic loss of Constable Heidi Stevenson and the fallen victims of Canada’s worse mass shooting in Nova Scotia on April 19. 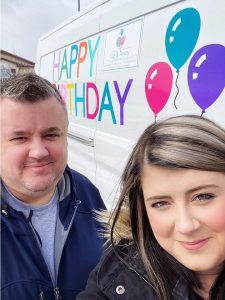 Cassondra Bennett and Dwayne Burton of Up & Away Balloon Co. Supplied photo

Business owners who are familiar with Fort McMurray’s celebration and party scene have also joined in on the fun.

Cassondra Bennett and Dwayne Burton of Up & Away Balloon Co. have been active in the party line of vehicles with their company van. They had to push pause on their local balloon business and were able to reopen on May 1. The team plans to continue participating when they are available.

“The experience honestly makes our hearts feel warm,” Bennett shared. “Just to be able to help put smiles on everyone’s face when the whole world seems gloomy is just such a great feeling. We feel for all the people whose birthday parties have had to be cancelled, especially the kiddies. So, we are just glad we get to be a part of the whole experience.”

Chubbs manages each event through the Fort McMurray Birthday Parties on Wheels Facebook group and has even attended all of them but a few. A few weeks in, residents took notice of the impact and rallied together to help provide funding to share thanks to Chubbs and support her for gas cash or anything she’d need.

Local artist Amy Keller-Rempp shared her thanks to Chubbs by creating a portrait of her with the Fort McMurray Birthday Parties on Wheels crew and left it taped to her front door on April 12.

For Chubbs, managing the events has turned into a full-time job. Prior to the COVID-19 pandemic, she spent her days serving clients at her home-based salon Head Case Artistry. While the Alberta Government’s relaunch strategy includes her business in the first phase, Chubbs said she will ease back slowly with respect to her immune-compromised son.

In the meantime, she plans to continue hosting the events and said having a day off isn’t something she even thinks of as they’ve been able to help bring happiness to places like the Rotary House and to children in the autistic community.

“I don’t know how to describe it. It just fills my soul,” she said. “I haven’t had a day off in six weeks and I don’t care. We have families who join us and dress up in costumes and it’s great. If you have a Halloween costume wear it. There are so many people that get so into it.”