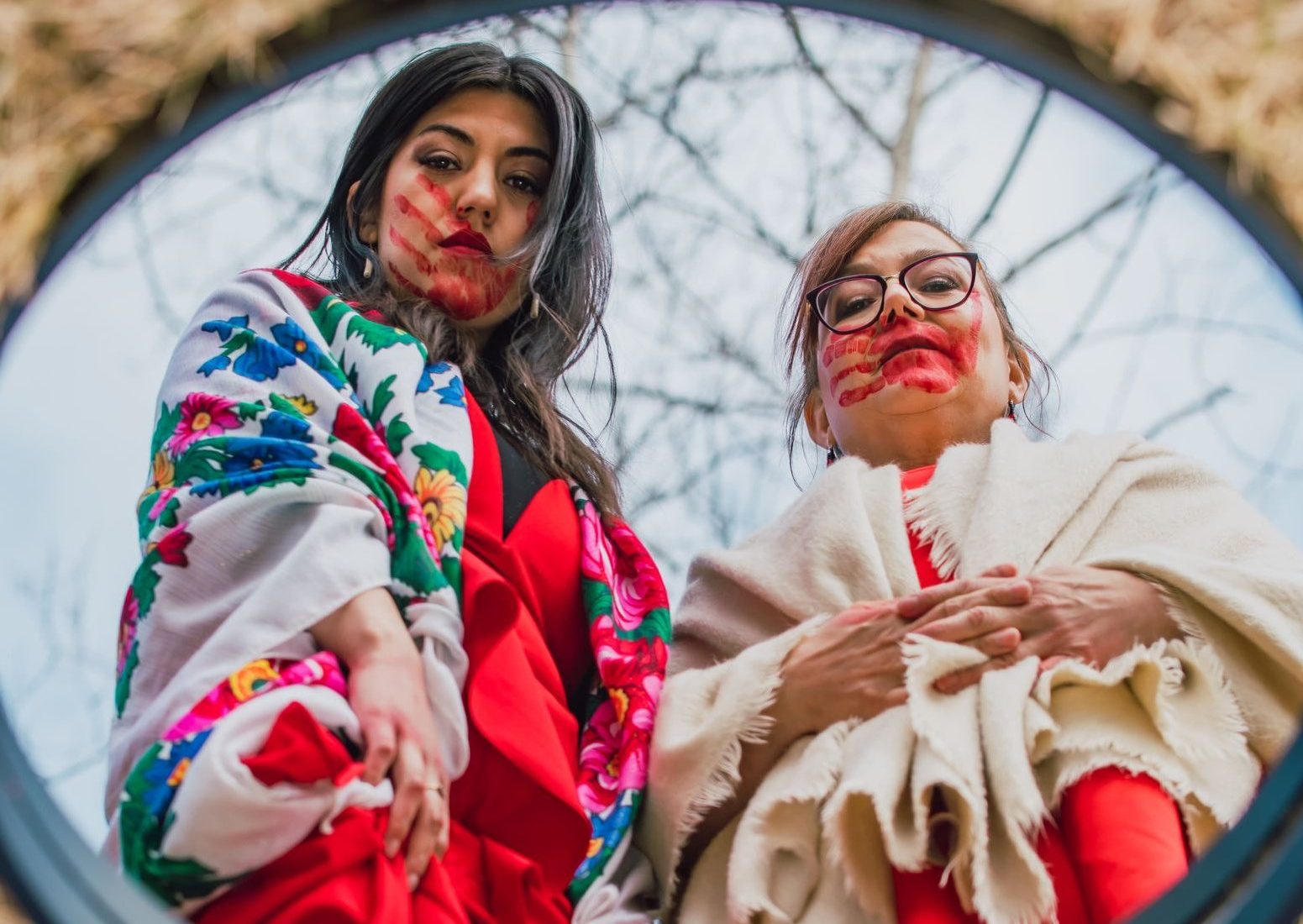 Females of all ages from four families band together outside of Anzac with painted faces and wearing red fabrics under a forest canopy with ten dresses hanging above their heads. Their mouths hand-printed with red and black paint for a purpose; to symbolize the violence that affects Indigenous women and evoke the marking of their absence.

They stand among the trees to echo the Red Dress Day movement, which is nationally recognized each year for the past decade on May 5 after the launch of the REDress Project by Métis and Finnish artist Jamie Black in Winnipeg.

The ones in the photos being taken are Indigenous grandmothers, mothers, adoptive mothers, aunts, sisters, cousins and grandchildren -all uniting together to raise awareness of the ongoing local crisis of Missing and Murdered Indigenous Women and Girls (MMIWG). 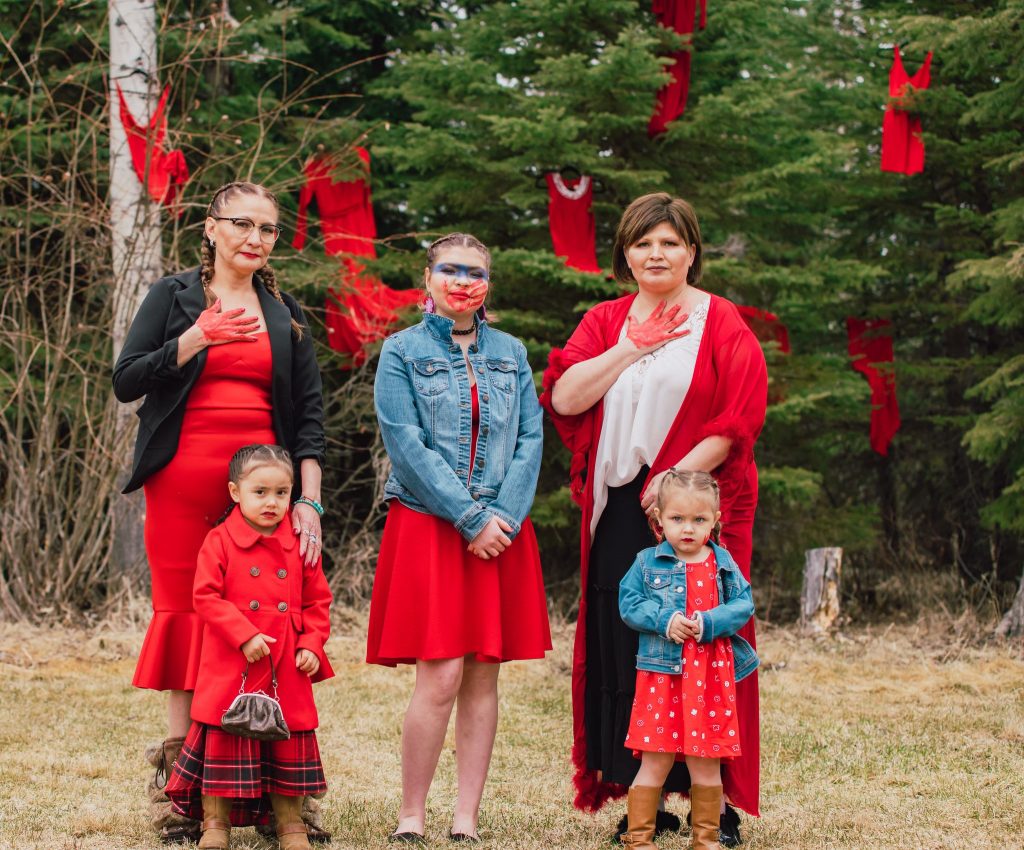 The local MMIWG photographic initiative was spearheaded by community influencer Amanda Chubbs to create an opportunity to inspire reconciliation and safety for Indigenous women and children.

“The women who joined us today all said the same thing: “It’s time we all stand together. We need to stand up for our people”,” said Chubbs on May 2.

By Chubbs offering salon services from her business Head Case Artistry and partnering with Rienna Davey of RBD Beauty Photography, the pair organized a photoshoot of unified strength for females.

Davey, a Métis residing in Anzac, shared how this was her first MMIWB photography project and felt empowered by being a part of the experience. 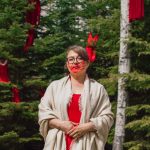 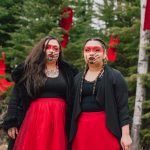 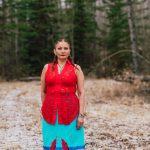 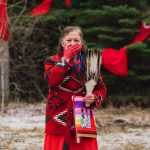 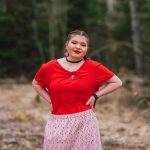 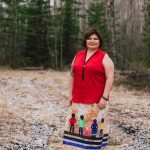 “This photoshoot was incredibly meaningful and powerful. It’s so important that we not only bring awareness but honour missing and murdered Indigenous women and girls. We remember and support their families. We look out for each other. We fight for each other. And we never stop searching. We wear red to honour our stolen sisters,” said Davey. 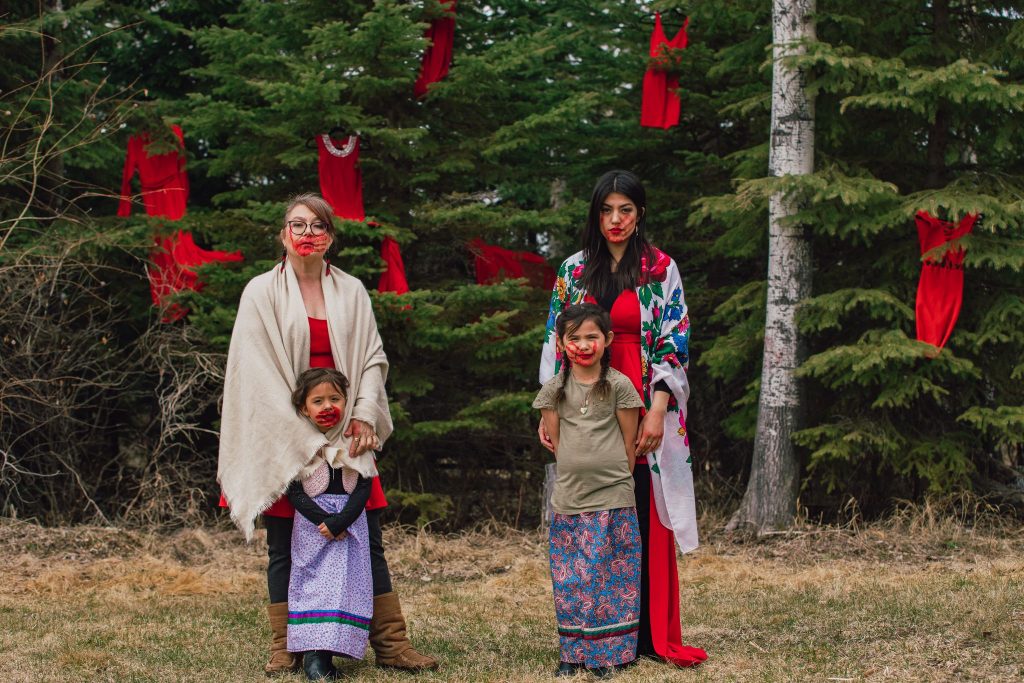 One month ago, Chubbs learned the news of 35-year-old Ellie Herman being identified when there were human remains found in the wooded area near Silin Forest Road and Thickett Drive.

“This hit close to home to me because I didn’t know Ellie personally, but I remember seeing her face around Fort McMurray. She lived in an apartment in my neighbourhood,” she said. “I wanted to raise awareness and do my part, and after last month’s finding of missing Ellie Herman in Thickwood, I knew it was my time to help.”

Like many of the missing and murdered Indigenous women across Canada, Herman was a mother, sister, loved one, friend, neighbour, and the cause of her death is yet to be determined.

Today, Canadians are encouraged to wear red in order to draw attention to the more than 1000 missing and murdered Indigenous women in Canada. Follow the movement on social media using the hashtags #mmiwg #reddressproject and #reddressday.

The Missing and Murdered Indigenous Women from the RMWB

The following information was collected and is written as described on the Justice for Native Women online database for Missing and Murdered Indigenous people, excluding Ellie Herman as her profile was not listed. 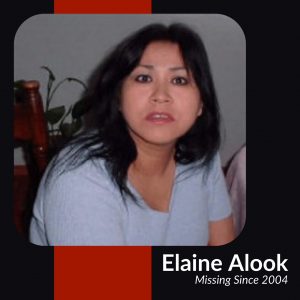 Elaine Alook was 35 years old when she disappeared from Fort McMurray, Alberta, in 2004. She was last seen on May 11 of that year in a black bomber jacket with a short cast on her arm. She had left her home in Anzac, where she worked at a restaurant to see a doctor in Fort McMurray as she had dislocated her wrist.

She was last seen at the Plaza II Mall and was reported missing on May 27. She took none of her possessions with her, and her bank accounts have not been accessed since she vanished. Authorities report possibilities she was on her way to Vancouver as she expressed interest in moving there. She has many acquaintances and associates in Grande Prairie, Hinton, High Level, Fort Vermilion, Lac La Biche, Edmonton, and across Northern Alberta. She had four underage sons at the time of her disappearance, as well as eight concerned siblings. She remains missing.

Description: Elaine was 5’4 and 160 pounds at the time of her disappearance. She has a scar on her back. She usually wears a couple of rings and chains. She has black hair and brown eyes. 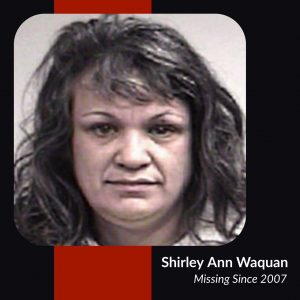 Shirley Ann Waquan was 39 when she disappeared from Fort McMurray, Alberta, on July 1, 2007. There is very little information available in her case and Shirley remains missing.

Description: Shirley has a scar on her cheek, scars on both sides of her hips, and a tattoo of “SHIRL” on her right wrist. She was 5’6 and 199 pounds at the time of her disappearance. 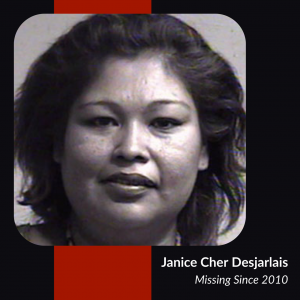 Janice Cher Desjarlais was 35 years old when she and her boyfriend crawled into a dumpster to sleep behind the Center of Hope on October 1, 2010, in Fort McMurray, Alberta. The man reported leaving Janice at about 7:30 that morning and returning an hour later to find her gone. The man panicked, believing that the dumpster had been emptied by a garbage truck.

Authorities reviewed surveillance video that showed the man leaving and no one else entering or leaving the dumpster. The dumpster was emptied that morning at 8:22 a.m. A nine-day search was conducted at the local landfill but Janice was nowhere to be found. She is believed to be deceased but her body has never been recovered.

Description: Janice is 5’6 and 240 pounds with a heavy build. She has long black hair and brown eyes. She has a tattoo of a scorpion on her right leg. 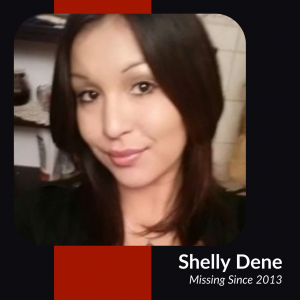 Shelly Dene was 25 years old when she vanished from Edmonton, Alberta in August of 2013. She was not reported missing until November of that year after several months without contact and her phone disconnected. Family reports that Shelly loved to travel and had discussed going to the Yukon which is why they were not initially worried. The last contact she had was with her sister in response to a text asking if she was okay. Her response was “no.”

Shelly and her siblings were raised by alcoholic parents who struggled with memories of Canadian boarding schools. Shelly was three years sober and had regained custody of her son from social services when her father passed away in 2012. Following that, Shelly sunk into a depression and again began to use. Her use again led to her losing custody of her son. Her family describes her as not being in a good state of mind when she disappeared, telling them she was uncertain if she would ever get her son back again. Shelly remains missing.

Description: Shelly was 5’7 and 111 pounds at the time of her disappearance. She has brown hair and brown eyes. She has a scar on her right cheek and a piercing above her left upper lip. Some agencies refer to her as “Shelly Tanis Dene” or simply “Shelly Dene”. 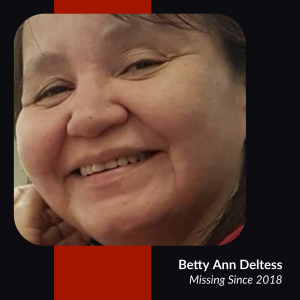 Betty Ann Deltess was 46 years old when she was last seen in Janvier, Alberta on April 12, 2018. It is reported that on the 11, Betty was seen at a Janvier store and visited a friend for several hours later that evening. At 1:30 a.m. on the 12, Betty reportedly left to go to another friend’s house for a visit but never arrived and has not been seen or heard from since. Her family reported her missing on April 19, 2018. Authorities consider Betty’s disappearance “suspicious” and she remains missing.

Description: Betty is 5’5 and 150 pounds. She has brown eyes and short brown hair. 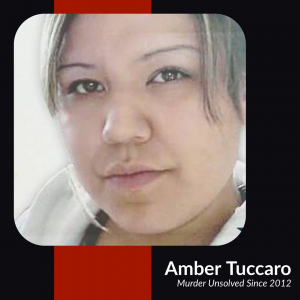 On August 18, 2010, 20-year-old Amber Tuccaro disappeared from Nisku, Alberta. Amber travelled from Fort McMurray and was staying in Nisku as hotel prices were lower than in Edmonton, where she planned to travel the next day. Jacob, her 14-month-old son, and a female friend travelled with her. Amber became too excited to wait until the next day for her travels and decide to hitchhike into Edmonton that night. When Amber didn’t return the next day, her friend called Vivian Tuccaro, Amber’s mother.

On August 28, 2012, two years after Amber’s disappearance, Royal Canadian Mounted Police released a 61-second clip of Amber’s last phone call. Authorities hoped that the man whose voice appeared on the tape could be identified by the public. Four days later on September 1, 2012, horse-back riders found Amber’s body on a rural property near Leduc County.

If you have any information regarding the murder of Amber Tuccaro, contact Leduc RCMP at 780-980-7200. 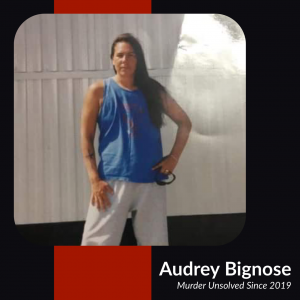 Audrey was 49 years old when she was found dead outside a residence on Sparrow Hawk Drive in the Eagle Ridge neighbourhood of Fort McMurray, Alberta on December 25, 2019. Audrey herself has been charged with violent crimes including a 2005 conviction for manslaughter when she killed a woman during a fight. In 2012, Audrey was implicated in another murder and a bulletin was put out to the public warning them that she was violent and chemically dependent.

Audrey’s death is being treated by authorities as “suspicious” but her cause of death has not been released to the public. Police are asking for any information people may have about Audrey’s activities the day before her death: December 24, 2019.

If you have any information regarding the death of Audrey Bignose, contact the Fort McMurray RCMP at 780-788-4040. 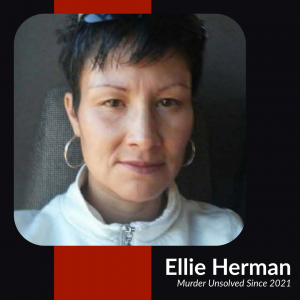 On September 20, 2019, 35-year-old Ellie Herman was last seen in Fort McMurray, Alberta. She was reported missing by police on October 21, 2019. On March 20, 2021, the Wood Buffalo RCMP responded to a report of found human remains in a wooded area in the Thickwood area of Fort McMurray. The remains have been identified, however, the cause of death has yet to be determined. The investigation into Herman’s death is ongoing and the area where her remains were found will remain closed to the public until further notice as police continue to search it.

If you have any information regarding the death of Ellie Herman, contact the Fort McMurray RCMP at 780-788-4040.

Get Ready to #GetReal