Local hockey players are coming together tonight to take part in a 24-hour tournament to raise awareness and funding support for the Movember Canada movement.

Starting at 7:15 p.m., the second annual Handlebar Hockey 24 Hour Charity Hockey Game will begin with an opening ceremony at the Casman Centre. The first hockey game starts at 7:30 p.m. with over 60 players of men, women and youth playing in various games until the following evening on Saturday, November 17, 2018. 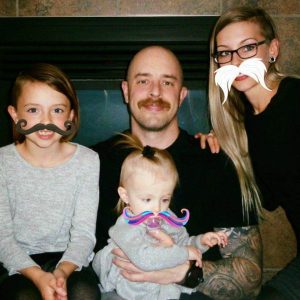 Clinton and Shannon donning moustaches with their daughters for Movember.

Event organizers Clinton and Shannon Bretecher started the initiative last year to bring the Movember Canada movement to Fort McMurray and raised $25,000 for the cause.

“Clinton wanted to do something meaningful for our community, and I jumped on board,” said Shannon Bretecher of her and her husband kick-starting the event. “We are proud to call Fort McMurray home, and Clinton had a seed of an idea to do a charity event focused around hockey and Movember.”

Movember Canada is a national foundation focused on raising funding and awareness for prostate cancer and testicular cancer, as well as mental health and suicide prevention. Since 2003, the movement has grown to a global platform. Today, it has support from over five million “Mo Bros and Mo Sistas.”

With Clinton losing his father to health at a young age, the cause hits home for many reasons. Shannon believes stories need to be shared to help support the men in the Fort McMurray community.

“Movember was something he (Clinton) always supported and felt was an important cause having had lost his father at a young age for health reasons, which highly impacted his youth and young adulthood,” she said.

“I also think this became more important, and an evident need, following the wildfire after hearing many stories of very real and serious struggles from friends or friends of friends and their families. He wanted to put his idea to task and make change for men and those impacted by men’s health. We have received a lot of local support and uplifting comments about this event.”

Due to the incredible success from the 2017 event, Movember Canada is sending a film crew to document this weekend’s charity hockey game. BELOW: The recruitment video of Handlebar Hockey organizer Clinton Bretecher sharing why the cause is important.

Handlebar Hockey organizer Clinton Bretecher talks about how to get involved and play in the 24 hour hockey game and why playing for 24 hours was so important.A huge 'Thank You' you to L. Elliott Pierre at Aurakey Digital Agency and Patriotic Dad – Rob Boutilier for your help in making this video!

Tomorrow at 10 a.m., players from the minor hockey teams will take over the ice with a two-hour block.

“Our goal is to include them in our event as part of our hopes to raise awareness and change the stigma around men’s health. The conversation starts here, when they’re young, so we’re happy to include them,” Shannon said. “They get pretty excited to share the ice with the adults who have been playing for so long and play for a good cause.”

The community is welcome to cheer on the players throughout the 24-hour event. After the tournament, players will join together for a wind-up at the Wood Buffalo Brewing Co. on Saturday night.

If you’re looking for local support for men’s health, Fort McMurray has the resources. Visit Some Other Solutions, Alberta Health Services and the Canadian Mental Health Association. For updates and announcements for the second annual Handlebar Hockey 24 Hour Hockey Game, check out their Facebook page.

Celebrate the Season of Giving with the Salvation Army