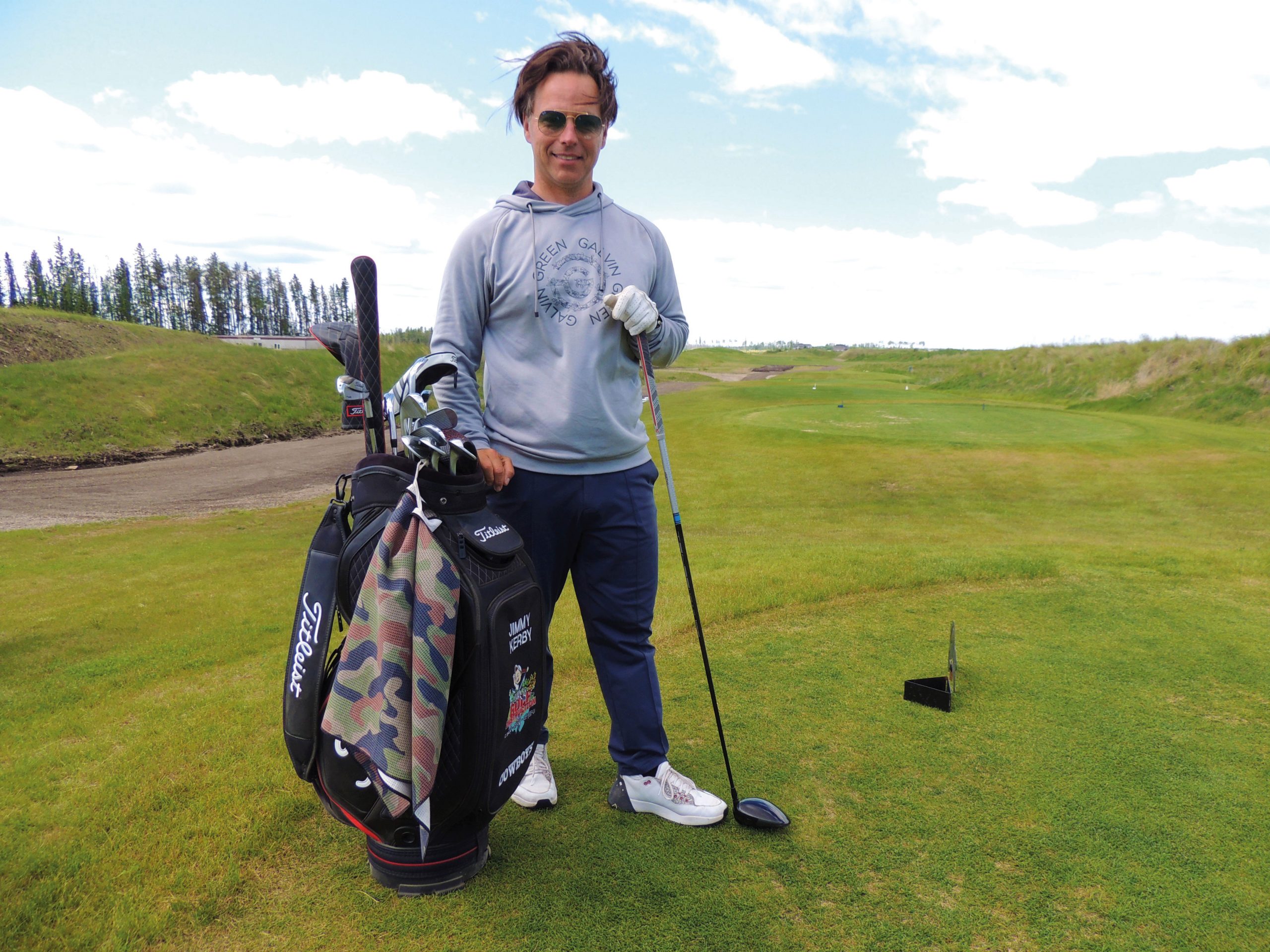 The school gym storage is typically stocked with basketballs, dodgeballs, volleyballs, baseballs, footballs, exercise mats, skipping ropes and maybe even one of those fun rainbow parachutes.

However, a rarity found within its walls is a set of golf clubs. So, it may not come as a surprise to how the game has had its antiquated reputation for decades of being something businessmen or retirees play, as children historically have had limited opportunities at a young age with little to no introduction to it.

But once a new player discovers the game, eye-opening revelations on a physical, social and emotional level are revealed. Even today, more people have flocked to the greens for the past year and a half due to limited options to enjoy playing sports through pandemic life. (The PGA Tour also recently announced research showed younger demographics bumped up in ratings for its televised viewing programs.)

PGA Canada professional James Kerby understands all of the above as he became a junior member at the Miskanaw Golf Club in 1986.

Throughout his life, he’s travelled the globe receiving mentorship from some of the top head and Canadian Touring professionals, which inspired him to enroll in the Golf Management Program at Royal Roads University in Victoria, B.C.

He found his passion for the game through teaching, and it led him to join the United States Golf Teachers Association (USGTF) and trained in Las Vegas, Nevada, to become a member.

In 2001, he was a medalist in the playability test at Las Vegas Country Club.

“I had many positive people in the community that were influential in my life who helped me build genuine relationships and take a real interest in golf. It led me to build up youth’s self-confidence by providing them with the same positive mentorship I had,” said Kerby.

Today, Kerby is the Operations Manager and Head Teaching Professional at RotaryLinks Golf @ Wood Buffalo, and he’s bringing more golf playing opportunities to children and youth within the region through his position as the sole junior instructor. 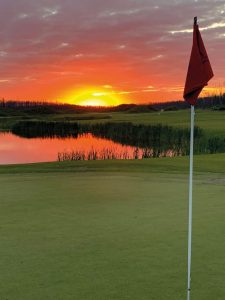 “RotaryLinks has always put great emphasis on the development of the game through youth involvement. Although we are a new business with limited resources, we still felt it was important to provide an affordable recreational option for parents to have their kids participate in,” he said.

Since its inception, RotaryLinks has brought in over 1000 junior rounds donated by the Rotary Club of Fort McMurray with the Take A Kid to the Course program. Kerby said RotaryLinks’ future hopes are to continue to build on such programs.

He would also like to encourage schools to incorporate the game into their PE programs through the Academy at RotaryLinks, the same way he had experienced with high school hockey programs growing up in Fort McMurray.

“I believe golf could share this in the same aspect of hockey by having a program that runs in the winter, building the fundamentals, working on the mental aspect of the game, working on fitness, diet and swing mechanics could all be incorporated into a program during the off-season. It would ensure that the teams would be ready to compete once spring comes around,” he said.

“I know programs through the schools would build interest in the game with our younger demographic and the community, as more access and knowledge brings a better understanding of it all. We have some wonderful golf professionals here that really would like to get involved in such a program.”

A Game for Physical and Mental Health

According to Golfandhealth.org (a project funded by the World Golf Foundation), golfing provides mental well-being benefits. Research highlights it can help individuals improve their confidence, self-esteem and anxiety levels. The physical portion is also a proven treatment for depression and anxiety.

“Golf provides health in the aspect of supporting your physical and emotional well-being. There is a purpose the game provides as it gives you a meaningful activity that has reachable goals. Although a golf course is not technically ‘a home’, we encourage mentorship and try to build a safe place for youth to connect to positive role models,” Kerby explained.

Golf can also be a game played throughout one’s lifetime, from child to senior. Kerby suggested starting at age five or six and keeping time spent on the golf course fun and short for children until they develop their interest.

“As a father of four, I have a great connection with the juniors. It is important when teaching children and youth to be aware of their attention spans and provide them with challenging and interesting drills. I have some great camps that incorporate a playing lesson, which helps them understand some of the game’s intricacies. It gives them the confidence that they understand etiquette and rules, such as pace of play.”

As RotaryLinks is underway with its master plan for construction of opening its 18-hole, its current 9-hole is a superb setting for younger ones to gain the experience with Kerby, who further explains how they can adapt well to the golf course’s friendly environment.

“One of the great things about choosing RotaryLinks for your children is that it is a family-friendly environment that builds its membership around families and like-minded people,” said Kerby.

“Community brings many of us at RotaryLinks to the game. Golf is a tight-knit community all over the world. When travelling, you will always find a familiar setting. Once you know the game, even as a novice, you will be able to travel and meet others who have the same love of the sport as you,” he said. 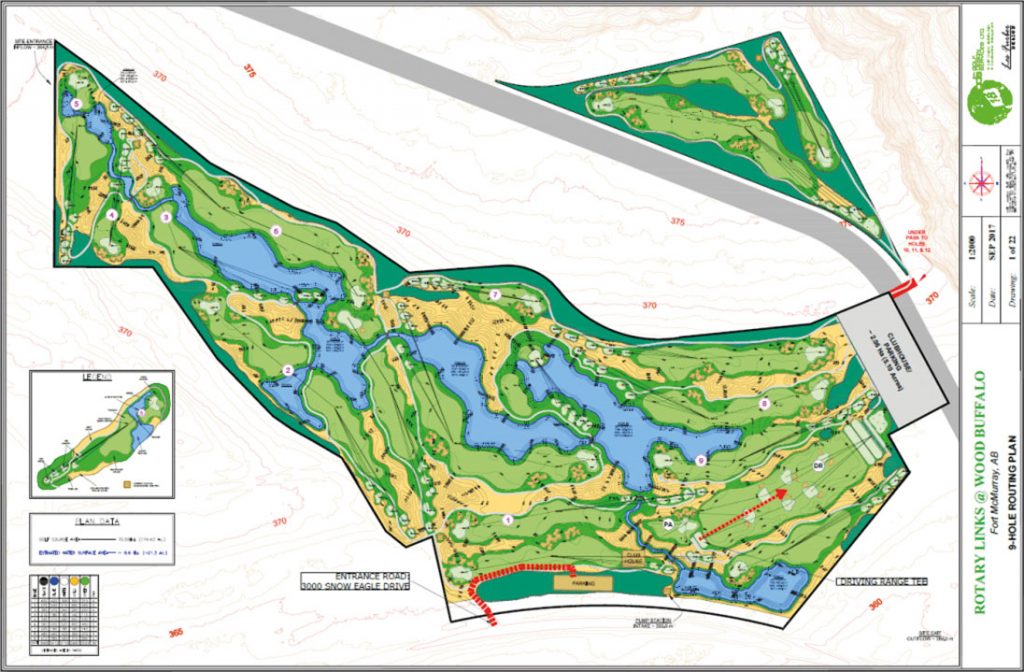 A rendering of RotaryLinks master plan. Construction is currently underway with an anticipated 18-hole opening date.

RotaryLinks Golf @ Wood Buffalo is a community golf course project established by the Rotary Club of Fort McMurray. Its goal is to provide a venue for recreational golf and create social interaction for its guests who enjoy the game.

The Academy at RotaryLinks offers instructions and lessons for youth throughout its regular open season. To learn more about sessions and pricing, visit rotarylinksgolf.com.