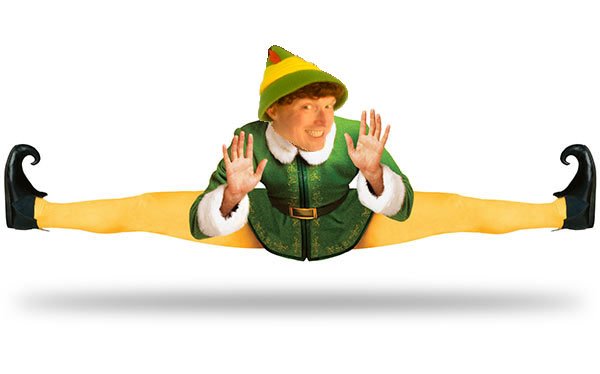 Did you know Fort McMurray had its very own Santa’s helper living among us? Meet Buddy Hobbs (aka local marathon runner Blake Crossley)! He’s a human, raised by elves, and the tallest of St. Nick’s helpers.

Unlike his fellow elf friends who live in the North Pole, Buddy resides in the Wood Buffalo region. You’ve most likely spotted the Gentle Giant running around the city streets donned with his festive attire – a green hat and jacket and bright yellow spandex, waving at cars honking and pedestrians passing by.

Buddy has been spreading holiday cheer in the community since his first arrival in 2009 at the Keyano College’s Halloween celebration. Since then, he’s embraced in holiday sing-a-longs with seniors, handed out candy canes at Christmas parties and, last year, he made his debut appearance at the Northern Lights Health Foundation’s Festival of Trees.

YMM Parent met up with Buddy Hobbs to learn why he chose Fort McMurray to call home and why smiling is his favourite.

YMM Parent: Why did you choose Fort McMurray to spread holiday cheer for all to hear?

Buddy Hobbs: After I discovered I was human, Poppa Elf got me an Ancestry kit. From this, I found out I have family in Northern Alberta. I also love the Northern Lights and Fort McMurray has some amazing views of them. It reminds me of a big bowl of swirling gumdrops.

YP: Why is smiling your favourite?

Buddy: Son of a Nutcracker! That’s a great question!!! I like to smile because when a person sees you smile, they smile back. It makes me feel good inside like I do after eating a bowl of spaghetti with syrup.

YP: Where can we find you during the 2020 Holiday Season?

Buddy: You can find me here, there and everywhere, and when you least expect it – Festival of Trees Syncrude and Suncor’s Children’s Christmas parties and hopefully the annual Santa Claus Parade.

YP: What’s your favourite food to eat during the holiday season?

YP: What are you doing when you’re not out spreading joy?

YP: What advice would you give to kids to stay on Santa’s Nice List?

Buddy: Be nice to each other, spread the Christmas cheer by singing loud for all to hear, be nice to your parents, your teachers, friends and others. Do something nice for someone every day. The Big Guy up further North is always watching. Do not be a Cotton-Headed Ninnymuggins!

For updated and announcements from Buddy, check out his Facebook page.