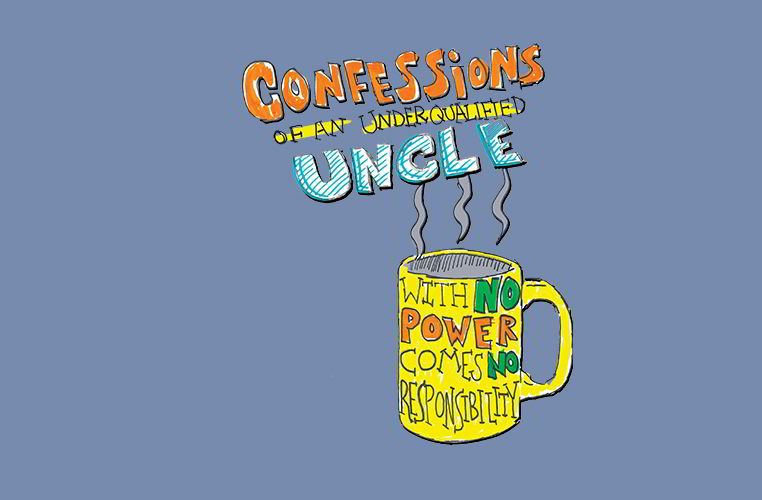 Confessions of an Underqualified Uncle

Someday, I hope to be as smart as my niece. At five years old, she already knew what she wanted to be when she grew up.

“Uncle Justin, when I grow up I’m going to be an inventor!” said Monica with frustrating levels of pride and optimism.

“Good for you, kiddo,” I reply. “It’ll be a lot of work though, in today’s political climate.”

“Well, sure why not.” This kid is out to lunch.

“Want to know what I’m gonna do first?” asked Monica.

“First thing I’d do is I would SHRINK the GROW ray!”

There is a silence between us. She looks at me as if I should be on the same page as her. I am definitely lost.

“… so that way after I shrink myself and I’m done being shrunk, I’m the same size as the grow ray and I can grow myself up again.”

Five years old. How does my sense of foresight measure up to this three-foot-tall, walking, talking Scholastic Aptitude Test?

The next day, I needed a bowl for my cereal (for dinner, of course) so I grabbed a recently washed bowl from the sink that still had water resting at the bottom.

Too lazy to simply dry the bowl, I did the class bachelor flick of the bowl with my wrist to flick the water out. You know, to dry it with wind. Instead, I cracked the bowl on the side of the counter. It was my only bowl. I ate my cereal out of a frying pan.

“Why don’t you just put the cereal in your coffee mug?” asked Monica.

“Why don’t you get back to work on that shrink ray?” I replied, handing her a MENSA application.

Welcome to the First Edition of YMM Parent

Local Business Spotlight: Change is in the Air at Peter Pond Mall