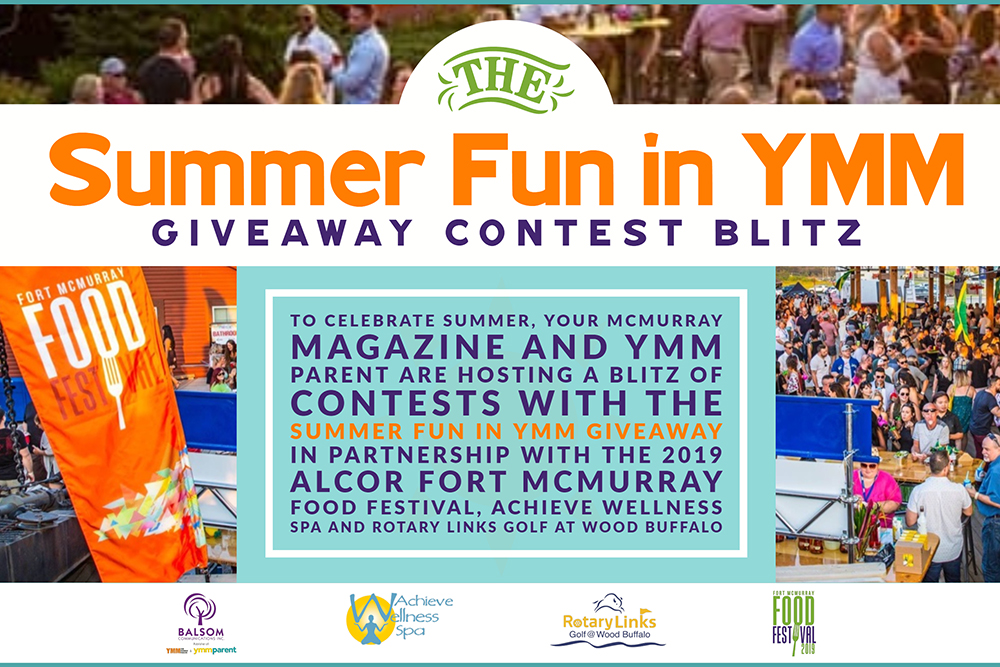 Locals know nothing can beat summer in the north and how Fort McMurray’s bright nights allow us to make the most of our warmer days. To celebrate this time of the year, Your McMurray Magazine and YMM Parent are hosting a blitz of contests with the Summer Fun in YMM Giveaway.

The prizes will allow you to enjoy different aspects of our city from golfing to a spa treatment to the theatre to the shipyard along with tickets to Fort McMurray’s best summer festival – The 2019 Alcor Fort McMurray Food Festival.

*Two Lucky Winners will be announced*

Boots N’ Brews presented by Servicemaster Restore in partnership with Prime Social Group and Country 93.3 is back at Fort McMurray Heritage Park for another YMM Food Fest with this year’s headliner Aaron Pritchett along with Kelsi Mayne, Drink Flamingo Project, Mychela and more.

Prize Pack 3: Plates for 8 at A Taste of Fort McMurray

Explore history while exploring several food options from Fort McMurray’s local restaurants and eateries. Each ticket provides a passport to every single food option available. And once you taste, you become a local food critic as your vote will help title the best plate from the rest.

The Four for Fore prize pack will allow you and three friends to enjoy a day out on the green and end it on the patio at the Fort McMurray Heritage Shipyard. (Golf passes can be used at any time during the season.)

To enter the contest, simply fill out the entry form on this page. You must be 18+ with a valid government ID.

Contest is open to all residents living in the Wood Buffalo region. See below for the Official Rules & Terms for the Summer Fun in YMM Giveaway.

By submitting this registration information, you indicate that you agree to the Official Rules & Terms. Your submission form will constitute your consent to the collection and use of this information.

The purpose of the Summer Fun in YMM Giveaway is to grant residents living in the Wood Buffalo region and prize packages to celebrate summer. For information on how to enter, please see #3 below.

All residents of the Wood Buffalo region are eligible to participate and must be 18+ with a valid government ID. The immediate family members of employees of Balsom Communications, their representatives, agents, and their affiliated entities, and any person with who any of the foregoing are domiciled are not eligible to participate. VOID WHERE PROHIBITED BY LAW.

Enter online at www.ymmparent.ca/summerfuninymm, complete the contest entry form with all the required information, and follow the on-screen instructions to submit your entry.

Best of Luck & Thanks for Making Fort McMurray Family Friendly!