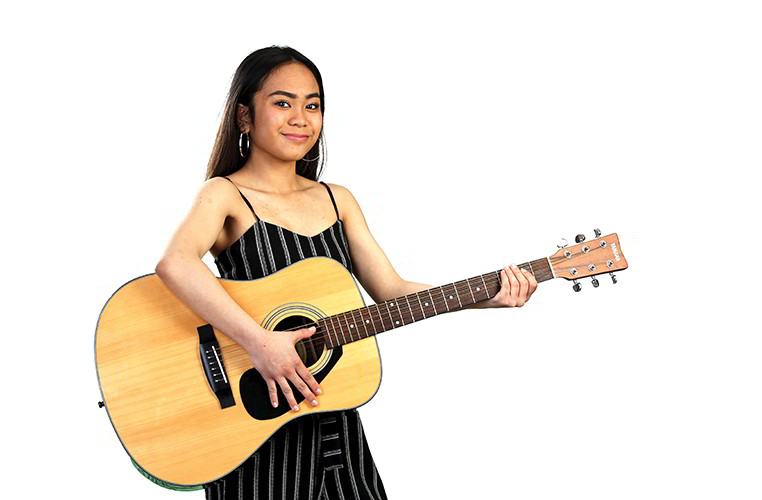 Future Goal: To find a career in psychology

“What I enjoy most about singing and songwriting is sharing it with my loved ones and people who might find common feelings or experiences through my songs.” — Daisy Mella

Daisy is an aspiring singer and songwriter and has had a love for music since five years old. She discovered she wanted to further pursue her talent in music after the Fort McMurray wildfire.

“All my lyric compositions, as well as my guitar,  was left in the house,” said Daisy. “My family and I almost lost everything when the fire happened. I never thought I would be able to own a guitar and make music again.”

However, while staying in Calgary, Daisy had a guitar donated to her, and she continued to bring joy to her family and friends with new compositions.

Since then, she professionally recorded two tracks. One is “In Heaven,” which she dedicated to her late-great grandmother. The song is in a collection album with the Fort McMurray District Recording Studio’s Youth Voices.

Her second song is titled, “Crossroads,” which she composed in two hours at the studio itself.

“The song is about making choices in life and not knowing exactly which path to take,” Daisy explained. “Along the way, we come across people we consider friends but aren’t exactly what they say they are. In the end, you don’t really need anyone but yourself to make decisions and succeed with them.”

Her favourite singer/songwriter and one she is inspired by is Lady Gaga. Daisy looks up to her meaningful lyrics and background story of how Lady Gaga became successful. Her favourite part about music is how she can share her experiences, feelings, thoughts, and emotions with people and connect with them. Songwriting is a way for her to share a message, whether it be love, hope, joy, or sadness.

Daisy performs for many residents on a regular basis at local fundraisers and sporting events including the Canadian-Filipino Association, the Multicultural Society of Wood Buffalo, and many more. Find her music on ReverbNation, Soundcloud, YouTube, and Facebook.