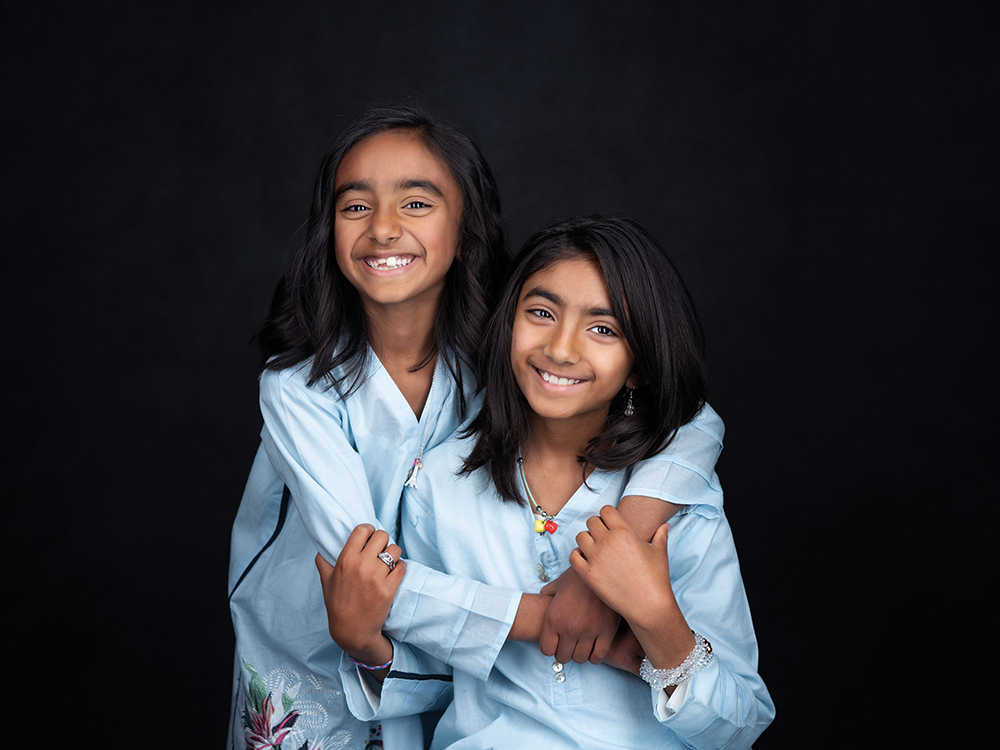 Age: 7
School: Grade 2 homeschool student
Future Goal: To pursue a career in medicine as a doctor

Noor and Ujaala Hussain are exceptional advocates, athletes and artists. At the respective ages of 9 and 7, the sisters have run numerous campaigns in a fight against cancer, have won many athletic awards, and collected many academic and artistic accolades.

In 2016, the Hussain sisters donated all their hair to the Canadian Cancer Society; they soon donated again in 2019.

Through their initiatives, they were able to raise over $8,000 for the Canadian Cancer Society. Their dedication and perseverance against cancer developed from the loss of a family friend.

“When we were younger, our dad’s friend’s daughter, our friend, passed away from cancer. Cancer is such a terrible illness that kills so many people, and we want to do our best to help these people out,” explains Noor.

“It was a challenge for us to donate all of our hair, but it helped us feel more empathetic towards the people who have to battle cancer every single day,” adds Ujaala.

Furthermore, Ujaala won a Quran reciting contest twice and earned a prize of $100 each time. From her winnings, she donated $50 to cancer the first time she won and donated $60 the second time.

Along with being advocates in the fight against cancer, the Hussain sisters also participate in food bank drives and volunteer at the Islamic Centre and Aloha Mind Math.

Besides community service, the sisters are also passionate about playing sports. Noor and Ujaala have played hockey for years.

Ujaala has won the Most Valuable Player Award twice, along with the Heart and Hustle Award.

The sisters also learn Karate. Ujaala is a white belt, and Noor is the youngest yellow belt in her batch. The Hussains continue their active lifestyle on their daily family bike rides.

Noor and Ujaala Hussain also practice speech arts. They have participated in the local Oilsands Rotary Music Festival and given many speeches on youth leadership.

When asked who her role models were, Noor commented her faith, Islam, and Prophet Mohammad, PBUH’s  kind, honest, empathetic, and trustworthy nature.

Ujaala said her role model is her mother as she always encourages, motivates, and helps her. Additionally, the sisters said they looked up to Terry Fox for his efforts in raising cancer awareness and Abdul Sattar Edhi.

Noor adds: “He is truly inspiring because he was so selfless and hard working. He only used what he needed and donated everything else to others.”

In the future, Noor would like to be an Industrial Engineer and design robots, along with healthy eating guidelines to help prevent cancer.

Ujaala would like to pursue a career in medicine as a doctor and provide affordable cancer treatment and raise awareness about climate change.

“We try to help the community and help those less fortunate than us to the best of our abilities. Service is important to us.”