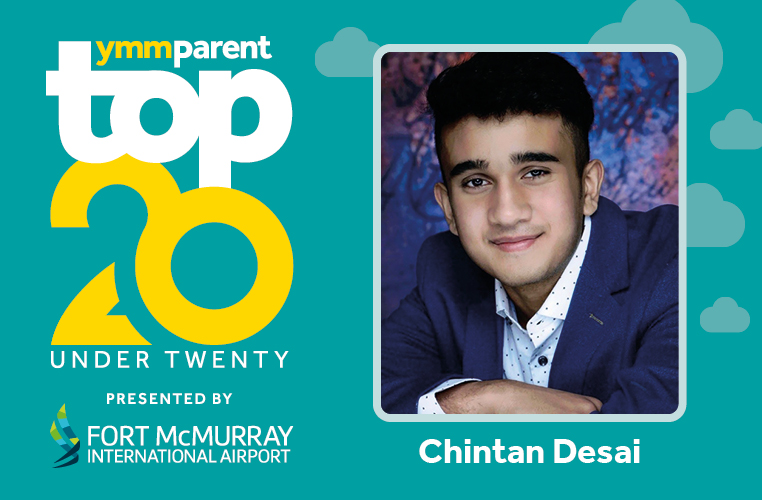 Future Goal: To make a difference in as many lives as I can

Throughout his years, Chintan Desai has made strides to advance in the community and his school in many aspects. A passionate individual that has developed a strong, work-ethic, Chintan’s stellar attitude has made him a remarkable leader.

His peers say he’s “a source of light” that does not fail to guide his teammates on the court, and he offers his knowledge to a student in need.

In 2016, the Fort McMurray wildfire devastated the natural beauty of our community.

Being part of the Green Team program, Chintan wanted to help renew what nature had driven away because he believed that there was a way to bring the community of Fort McMurray back together and rejuvenate the environment all at the same time. His solution was EcoYOLO.

“I want to continue my path of making a difference in the community, as well as the lives of the people that I encounter.” — Chintan Desai

In two years, Chintan led a team of students to raise over $20 000 in sponsorships and achieve numerous awards, making him known on a national level. By the end of the initiative, he engaged over 600 students to replant over 4,000 trees in and around the community.

Through EcoYOLO, Chintan “fulfilled his goals to educate students today to give back to the community and get involved in helping the city as a whole.”

As Chintan entered high school, he started to diverge into different passions by excelling in the rigorous workload of AP classes and often took to helping his classmates do the same.

On the court, Chintan served as a leader of the Varsity basketball, badminton, volleyball teams and represented his school at many athletic tournaments.

After school, you could find Chintan promoting multiculturalism at his school through his presidency of the COLOURS Multicultural club. He would also be found tinkering away at a robot to take to robotics tournaments throughout the province.

He also continued his environmental stewardship by being a senior member of the Green Initiative Club.

“During high school, my goals were to better myself as an individual while also leaving an impact on the community where I have lived for more of my life,” he said.

“As I attend university, I want to continue my path of making a difference in the community, as well as the lives of the people that I encounter.”

Out of school, Chintan holds volunteering as a crucial step to being an active citizen and promoting the wellbeing of his community.

He enjoys volunteering at events from YouthComputing, Multicultural Society of Wood Buffalo, FuseSocial, Sustainival, Festival of Trees, and the Summer and Winter Games.

Aside from volunteering, he also has a love of technology. He has worked with BrainSTEM Alliance to create a children’s game that teaches some chemical engineering fundamentals. Chintan tries to bring light into the lives of the people in our community.

At heart, he is a storyteller; he tells the story of himself, his peers, and Fort McMurray through his actions at school and in the community.