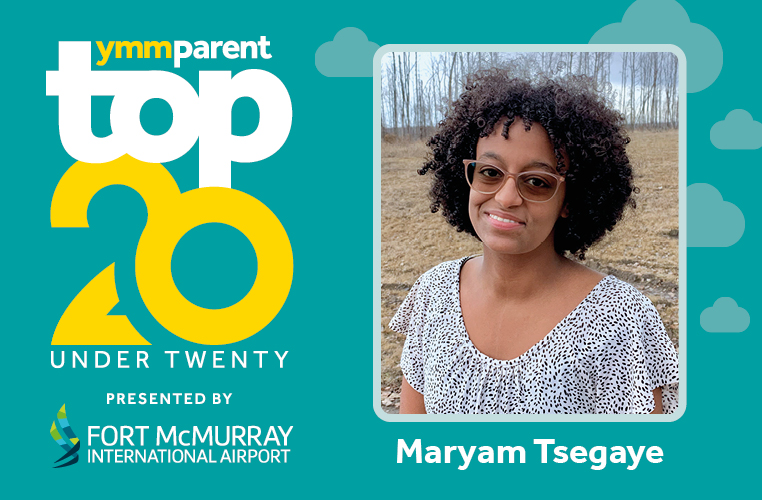 Future Goal: To major in physics and minor in music

Maryam Tsegaye is a well-rounded and upstanding student who strives to create change in her school and community. She is an integrative thinker who explores different topics in-depth and seeks to understand.

“Every activity I am involved in boils down to a core value at some point; helping and serving others or creating art,” she said.

“Any topic or idea or activity that is enriching and you like so much that you lose track of time, that’s probably something worth spending time on.”

She also volunteers her time explaining how she won to youth to inspire and encourage them to participate in the challenge.

“Any topic or idea or activity that is enriching and you like so much that you lose track of time, that’s probably something worth spending time on.” — Maryam Tsegaye

In 2019, Maryam was a member of the Student Summer Advisory Panel for Alberta’s Minister of Education and provided her perspective regarding provincial education programs.

She was also the Social Media Director of Queens in Code. She worked alongside her fellow members to introduce young girls into the STEM (Science, Technology, Engineering and Math) field.

Many peers and youths in the community describe Maryam as charismatic and consider her to be a role model. She is also bilingual and fluent in both English and French.

Maryam is a senior leader in the Concert Band at her school and has performed music locally and internationally. She plays various instruments and has learnt numerous pieces of music.

She also mentors younger members by teaching them how to play and providing tips. Maryam was a member of the Alberta Wind Symphonies, an honours music program for talented high school musicians throughout Alberta.

She worked with some of the finest concert band conductors and played music pieces. She received the Canadian Band Association’s Distinguished Musician Award.

Despite making great strides in her school and community, Maryam is talented artistically and participates in annual regional art contests.

Her artwork has appeared throughout Fort Mcmurray and helped to beautify the community. In addition, her artwork has also played a role in helping to intrigue newcomers.