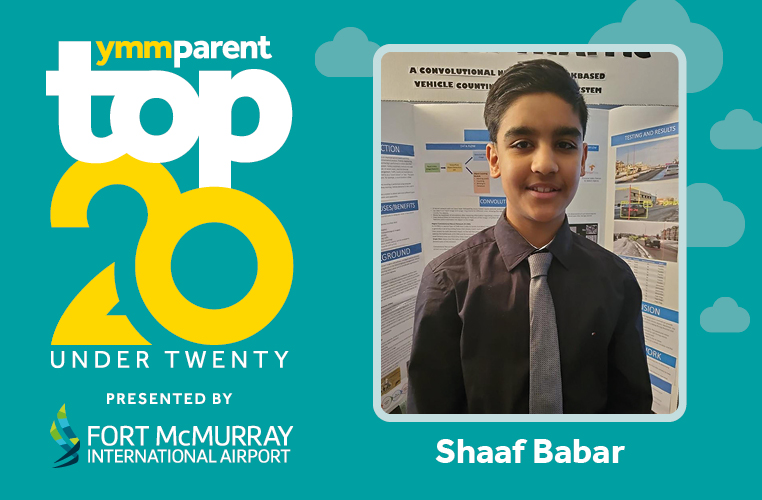 Shaaf Babar is someone you have likely seen around the community. From sports and school to involvement in volunteer initiatives, he constantly manages his time to fit it all into his schedule.

Shaaf is a part of Westwood’s Green Initiative. During his time in the club, the high school was named the third greenest school in Canada.

He is also a member of his high school’s Robotics team. This experience led him to mentor elementary students for their Robotics teams.

“Volunteering is the stem of community involvement, the growth of our character and the characters of the people around us are determined by it.” — Shaaf Babar

Not only bound to school clubs, but he is also a big part of the Fort McMurray Islamic Community, being a member of the Markaz Core Group. And, Shaaf gave an important speech for The Citizens Foundation, an Islamic organization whose goal is to help less fortunate kids in other countries.

His community involvement does not stop here, as he is an avid believer in volunteering.

“Volunteering is the stem of community involvement, the growth of our character and the characters of the people around us are determined by it,” he said. Shaaf does not limit himself to academics and, as a result, continues to excel at sports.

Just this past year, Shaaf was a part of Westwood’s Junior Varsity Basketball Team. He has also represented the region as a part of the U15 Fury Soccer Team, and his team won many tournaments in Lac La Biche and Edmonton.

Aside from his community involvement, Shaaf is a futurist. He is a person who is actively encouraging others to reach their potential and makes his innovations to help others.

“I would tell children to think big and expose themselves to many different ideas, not to box themselves or limit themselves in any way,” he said.

He has had two appearances at the Canada Wide Science Fair, where he created innovative projects; Smart Escape and Street Smart. Smart Escape is an app he created using a mathematical algorithm to provide the shortest and safest path to an exit in case of an emergency.

Street Smart is another app he developed that detects and tracks potholes and large bumps. Due to these projects, Shaaf represented the Wood Buffalo region and won two bronze medals and a special award at the National Science Fair.